Chondrules as Astrophysical Objects
» Home » About this conference » Motivation 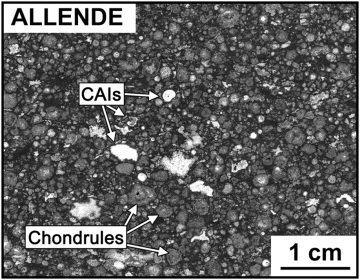 How can meteoritics and observations of planetary systems, including discs and debris, be used to inform general planet formation theory? This conference seeks to address this question by inviting meteoriticists, cosmochemists, and astronomers to explore how astrophysical observations can constrain chondrule formation models and how chondrules can help us put astrophysical observations in context.  Motivation for the conference includes, but is not limited to, the following:

(1) SED modelling have long revealed that discs contain submillimetre/millimetre grains.  For very young discs, such grains presumably reflect stages of growth, and for older systems, they reflect collisional debris.  Even though chondrules are not simply characterized by their size, they could have some connections with observed astrophysical submillimetre grains due to the perceived ubiquity of chondrules during Solar System formation.

(2) Planet formation theory and lab experiments have highlighted multiple, potentially significant barriers to forming planetesimals. In particular, radial drift, particle bouncing, and collisional fragmentation all seemingly prevent the growth of solids much past millimetre sizes.  As such, planet formation may typically stall in this size range, creating a sea of submillimetre/millimetre grains.

(3) ALMA observations of HL Tau have shown that its disc may already be well into the throes of planet formation, despite having an estimated age of less than 1 Myr.  From cosmochemistry of meteorites, we know that iron meteorite parent bodies formed within 1.5 Myr of CAIs.  Both of these suggest that large bodies form rapidly during planet formation. 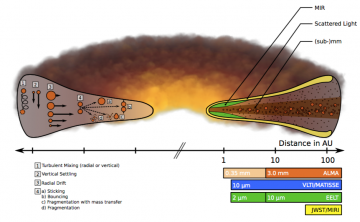 (4) Compositions of exoplanetary asteroids are now being measured. Many white dwarfs show infrared excess that is indicative of a debris discs, and some WDs show enrichment of metals in their atmospheres. These observations have been interpreted as revealing the slow destruction of planetary systems, destabilized by the host star’s transition to a WD. If this is correct, spectral features of metals in WD atmospheres reveal the composition of exo-asteroids.

At this conference, we solicit presentations that explore chondrules as astrophysical objects.  We encourage perspectives from different communities, notably astronomy and meteoritics.  A major product we hope to produce is guidance toward observationally constraining chondrule formation and the states of submillimetre/millimetre grains in discs and exoplanetary systems.  Examples of questions we aim to address are:

The conference will be funded in part by the Peter Wall Institute for Advanced Studies (PWIAS) at UBC.  The PWIAS’s goal is “to stimulate collaborative, creative, innovative interdisciplinary research that makes important advances in knowledge.”  This greatly extends to engaging scholars in fields that normally would not work together. To this aim, the conference will also invite discussion on “Astronomy, Meteoritics, and Art” with a focus on connections to meteoritics.  The term “Art” is interpreted broadly, and includes public engagement and journalism.